We’re covering President Biden’s speech on the anniversary of the attack on the Capitol and the arrival of Russia-backed troops in Kazakhstan. 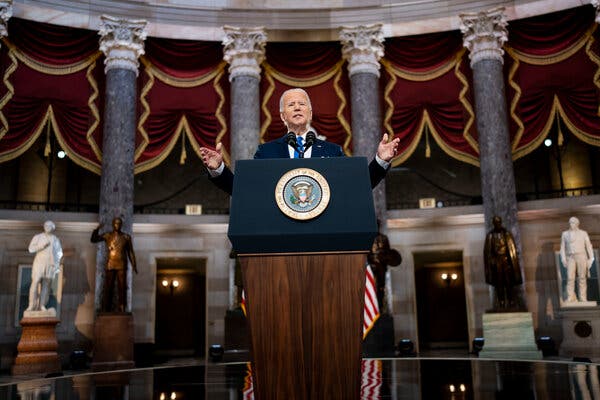 With lawmakers gathered in the Capitol on the anniversary of the Jan. 6 assault on the building by a pro-Trump mob, President Biden denounced Donald Trump for spinning a “web of lies” and threatening democracy.

In his most scathing attack on the former president since taking office, Biden accused Trump and his allies of holding “a dagger at the throat of America” and attempting to undermine the legitimacy of the election system — comparing Trump’s actions to those of autocrats and dictators in faraway countries.

Biden’s speech kicked off a daylong commemoration that underscored just how fractured the U.S. remains a year after Trump refused to accept a decisive defeat at the ballot box.

With not a single Republican senator in the Senate chamber, Democrats took the floor to deliver speeches attacking Trump and tying him to the violence at the Capitol on Jan. 6, 2021.

Related: Nearly a year after he left office, Trump’s grip on power in the Republican Party is still unrivaled, showing that the former president can outlast almost any outrage cycle, no matter how intensely it burns.

City hall was torched in Almaty, Kazakhstan, on Thursday.Credit…Pavel Mikheyev/Reuters

Troops from a Russia-led military alliance arrived in Kazakhstan in an attempt to restore order after a night of protests in the Central Asian country turned violent and the police reported dozens of deaths.

Protesters swarmed the streets in Almaty, the country’s largest city, all night and into the early hours on Thursday, setting government buildings on fire and overrunning the airport. By morning, commercial banks and stores were ordered to close, causing people to rush to A.T.M.s to collect cash and line up for bread.

Kazakh authorities said that in addition to those who had been killed, about a thousand people had been injured and up to 400 had been hospitalized. By Thursday, about 2,000 protesters had been detained, the interior ministry said.

The troop deployment is the first by the Collective Security Treaty Organization, a military alliance of former Soviet states, dominated by Russia. The operation was described as a temporary peacekeeping mission.

Background: The revolt in Kazakhstan began on Sunday as a protest against a surge in fuel prices. Even when the government said it would rescind the price increase, the protests widened.

Context: Kazakhstan has by far the highest G.D.P. per capita in the region and plenty of reserves, driven by billions in profits from oil. Most of this wealth, however, has not been equally distributed, with the elites living lavishly while many survive on meager salaries.

On the ground: The fires and destruction have been captured in these photos and in görüntü footage of the protests.

After a 10-hour airport standoff over the validity of his visa and questions about his vaccine medical exemption for the Australian Open, Novak Djokovic, the No. 1 men’s tennis player, was told to leave the country.

His team filed a kanunî challenge to the ruling on Thursday. A judge said Djokovic would be allowed to remain in Australia at least until Monday as his lawyers awaited a hearing.

The chain of events represented a startling turnabout for Djokovic, who in a little more than 24 hours went from receiving special permission to play in the Open to essentially being told by the prime minister that he was not welcome.

Context: Djokovic found himself at the center of a charged moment in Australia’s fight against the coronavirus. With an election on the horizon, a surge in Covid cases is stretching the country’s testing system as the government tries to shift its strategy from “Covid zero” to “living with the virus.”

Here are the latest updates and maps of the pandemic.

Evaporation ponds at a lithium plant in Chile’s Atacama Desert.Credit…Marcos Zegers for The New York Times

On New Year’s Day, a former gymnast from North Korea, who had sneaked into South Korea a year earlier, humiliated the military again by climbing back over the same fences and returning to the North. His feat raised the bewildering question of why someone would risk his life by making the crossing twice.

Lives Lived: Peter Bogdanovich, who directed the acclaimed films “The Last Picture Show” and “Paper Moon” before his professional reputation was tarnished in one of Hollywood’s most conspicuous falls from grace, died at 82.

Over the last seven years, a 10-year-old uzunluk, Ryan Kaji, and his family have created a toy empire on YouTube — amassing billions of views and earning tens of millions of dollars for his family each year.

Starting at 3 years old, Ryan was filmed playing with toys that his parents funded with a $20-a-week budget. Eventually a papier-mâché egg görüntü went viral, his parents quit their day jobs and the videos turned into a major business.

Now, across 10 channels that make up “Ryan’s World,” he plays with a new toy almost every day of the week, adding up to an avalanche of content that can overwhelm a child’s brain, click after click.

In this week’s magazine, Jay Caspian Kang looks at why so many kids want to watch Ryan’s videos. Read the full article here.

The main goal in cooking spaghetti carbonara is creaminess.

In “Emotional,” Leonard Mlodinow examines the effect of feelings on our thought processes and mental lives.

And here is today’s Spelling Bee.

You can find all our puzzles here.

That’s it for today’s briefing. See you next time. — Matthew

P.S. Juliana Barbassa, who leads Latin America coverage for our International desk, will join the Books desk as the new deputy for news and features.

The latest episode of “The Daily” is an interview with Liz Cheney.

You can reach Matthew and the team at briefing@nytimes.com.

Manhattan Springs Back to Life

Women’s Periods May Be Late After Coronavirus Vaccination, Study Suggests