It was a Hot Vax June quickly becoming a Delta Variant July soon to mutate into whatever August was (who can recall at this point?), and there was Clifton Mooney, a 1976 Polaroid SX-70 camera dangling on a nylon strap from his neck — the only part of his body, except his face, that isn’t heavily tattooed — clutching a beer, as hazy and bright as the afternoon sun blazing down onto the shirtless, gay New York City men around him.

Maybe he was at 3 Dollar Bill in East Williamsburg, with its pop D.J.s and massive parking lot, home to all sorts of alfresco shenanigans, or out for his maiden voyage to Fire Island Pines, the historically artistic queer beach community off the coast of central Long Island. It’s impossible to say, since Mr. Mooney’s strange, arresting images rarely reveal his subjects’ identity or location.

In one Polaroid, a man skinny-dips facedown across a seemingly infinite cerulean pool. Others show a pale butt in repose against the ocean, or a disembodied tangle of toned arms and hairy legs on the sand — all flesh but for their moppy haircuts and colorful Speedos.

“I enjoy anonymity, and I feel when you remove someone’s face, it’s more likely to reach people emotionally,” he wrote in an email in December. “We’re all the same. It’s society that has us categorized.”

It had been Mr. Mooney’s first real-ish New York summer, and, like many residents, he was determined to (responsibly) soak up all that the waking city had to offer. “Nothing was open when I got here,” he said during an interview in late September, sipping a lager outside the Levee, a stalwart dive bar in Williamsburg. Mr. Mooney, 35, was wearing a black T-shirt, black pants, a pearl necklace and white Nikes that had the word “gauche” scrawled in Sharpie ink across one of their soles, a reference to his Instagram handle, @gauchecowboy.

Mr. Mooney started the popular account, which displays his Polaroid portfolio, in the spring of 2020, soon after he relocated up north after a brief stint in New Orleans and nearly a decade in Austin, Texas. Back then, he liked to wear cowboy hats and socks with sandals. A frenemy evvel called his stylistic choices “very gauche,” which inspired his artistic moniker. “It just means tacky or unsophisticated,” he said. “And I was like, ‘That’s kind of me.’”

He had come to New York in April 2020, under dire circumstances. After growing up in West Texas, the son of a stay-at-home mother and an engineer father, he attended nursing school in Lubbock, then began working in the medical-surgical units of various hospitals. Such jobs are often considered to be among the toughest in health deva because they require dealing with a wide array of emergencies, including heart attacks, sepsis, post-surgical complications and severe dehydration.

As soon as the coronavirus arrived stateside in March 2020, placing great stress on New York City’s health deva system, Mr. Mooney heard from a nursing recruiter, who offered him a three-month contract at a Harlem hospital. The job paid well and came with a bonus, and he thought it may be an “opportunity to do something greater than myself,” he said, while also becoming more “financially sound.”

But the trade-offs were more intense than he could have anticipated. The day he arrived at his new job on a dedicated Covid-19 floor, there were half a dozen bodies lined up in gurneys down the hallway, he said.

The hospital’s morgue, as well as several refrigerator trucks parked outside, were already full. Most of his patients were on ventilators, and many of his colleagues, often new transplants themselves, had never worked together before, nor under such catastrophic circumstances. It was hard to communicate through their head-to-toe personal protective equipment, and they all feared catching the virus themselves.

“I saw hundreds of people dying,” Mr. Mooney said. “I don’t even know how many — there’s no way I could count.”

The Polaroids, then, became a kind of coping mechanism. “It’s never a super-great day in a hospital, so you really need something else to do besides that job,” he said, his Texas drawl still evident, whether an athletic activity or artistic pursuit. “I needed something that was completely opposite, that was sexy and dark and different.”

A few years earlier, his mother had given him a Polaroid instant camera for Christmas. Alone in his Bedford-Stuyvesant apartment after his disturbing hospital shifts, he began experimenting with taking suggestive self-portraits, building upon his brief past life as a fashion model, in shots that showed him, say, dangling a cigarette from the end of his inked forearm or crouching naked next to a cactus.

“The whole nudity thing is me exploring my sexuality, which goes back to being from West Texas,” Mr. Mooney said. “It was very much, like, ‘You’re gay, you’re bad, sex is not until marriage.’ Had I seen images of queer men being proud of their bodies, I think that would have made growing up a bit easier.”

His own images, with their nostalgically washed-out colors and carefully cropped bare body parts, often suggest something mischievous or macabre happening just beyond the prints’ chaste white borders. They feature scruff, torn tank tops and other accouterments of a nascent fashion trend that some in the industry call “sleazecore.”

Once it was safer to meet in person, Mr. Mooney began refining his aesthetic by capturing other (often fit, often tattooed) men in New York, making a few close friends along the way.

“A lot of my pictures are me going to somebody’s house, hanging out, drinking, smoking a little bit — and if they want to take their shirts off, that’s cool,” he said. “The intimacy of a Polaroid photograph is what makes it sexy, but it had become this kind of Urban Outfitters kid’s toy. A lot of people forget it’s a legitimate medium.”

Of course, there is a long artistic tradition, particularly in New York, of hot gay photographers chronicling their hot pals on Polaroid sinema, going back to Andy Warhol and his 1960s-era Superstars; Robert Mapplethorpe, with his S-and-M-suffused monochrome prints of the 1970s; Don Rodan, an influential photographer of the queer community in the same era; Peter Hujar, who chronicled the gritty East Village scene before dying, in 1987, from an AIDS-related illness, during a different pandemic; and Tom Bianchi, who for five decades has caught his beefcake buddies stripping down and canoodling in Manhattan, the Pines, Palm Springs and elsewhere.

Yet all these images read differently today, in an era that’s more intimately concerned — in photography, sinema, social media, pornography and in-person relationships — with conversations about consent. While Mr. Mooney follows in the visual tradition of his forebears, he’s also, by mere virtue of the era in which he works, asking distinct questions about what it means to be exposed, to be naked in one’s public or private life.

“I use the term ‘collaborative’ a lot because it’s about what the subjects want to do,” he said, describing his process. “Especially with photographers like Terry Richardson,” he added, referring to the aughts-era celebrity portraitist who was repeatedly accused of sexual misconduct, “you have to be very careful. I’m not like him in any way, but I don’t want people to feel that, because it may be their perception.” 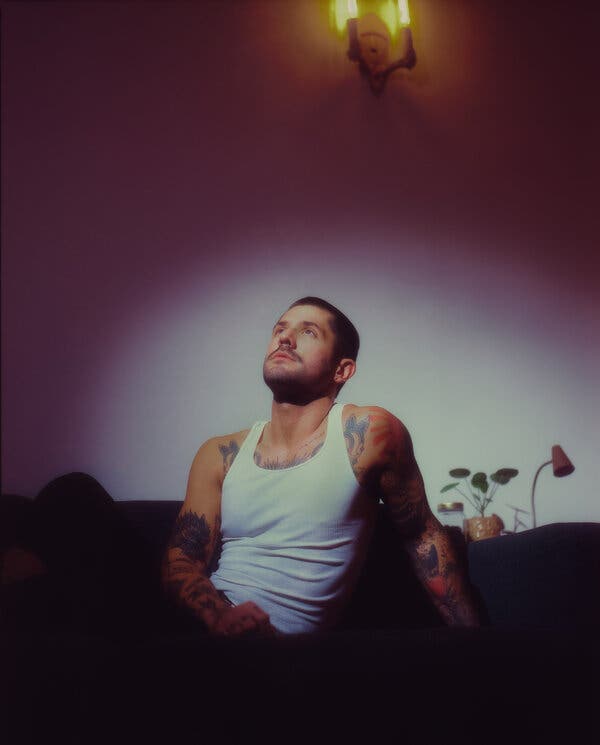 Mr. Mooney began shooting intimate Polaroid portraits after intense hospital shifts. “I needed something that was completely opposite, that was sexy and dark and different,” he said.Credit…Justin J Wee for The New York Times

Perhaps what Mr. Mooney shares most with his predecessors is the fact that he’s recently become the go-to portraitist for a certain kind of queer-adjacent celebrity, one who may want to get a bit lascivious on sinema. In June, Mel Ottenberg, a veteran fashion stylist and the recently installed editor in chief of Interview magazine (co-founded by Warhol in 1969), hired him to photograph the “Law & Order” actor and zaddy du jour, Christopher Meloni, who flexed in a white cotton crop top while lifting a barbell and eating a slice of pizza.

The story went viral, even though it was Mr. Mooney’s first professional commission. He brought the twin brother of his boyfriend, a prop stylist, to be his assistant; on set, they had to watch a YouTube görüntü to learn how to hang a seamless backdrop.

“You’re only young evvel, and you’re never going to look like you do in that moment — and that’s what his pictures feel like,” said Mr. Ottenberg, 45, who first found Mr. Mooney’s work on Instagram. “I saw a spark that you don’t always see, and it made me stop in my tracks and be like, ‘Oh, I want this.’”

Since then, Mr. Mooney has photographed Jeremy O. Harris, the polymathic playwright; Ryan O’Connell, a writer and actor who will star in the Peacock reboot of “Queer as Folk”; James Cusati-Moyer, a rising heartthrob, who asked Mr. Mooney to tag along as he got ready for the Tony Awards in September (he was nominated for his role in Mr. Harris’s “Slave Play”); and, for the most recent issue of Interview, the “Saturday Night Live” breakout star Bowen Yang, who wore a leather harness beneath a baby pink puffer jacket, then posted the pics to Instagram with the caption, “dream @gauchecowboy shots.”

By the time Omicron December arrived, Mr. Mooney had started a second Instagram account, @gauchefilm, reserved for moodily lit pictures made using another camera, a 35 millimeter one, with which he shot Mr. Yang. (As with his Polaroids, he doesn’t edit these after they are taken, fearing that might further contribute to body dysmorphia among his mostly gay male audience.)

While Mr. Mooney’s Instagram feeds were usually dedicated to his work, the nurse would occasionally show up himself, wearing hospital scrubs, alongside captions that lightly chastised his followers for whining online about their mild fevers or temporary loss of taste and smell, given the scores of earlier Covid patients who’d fared much worse.

Although cases were evvel again on the rise, Covid was under better control at the hospital where Mr. Mooney continues to work, and the recruiters came calling, wondering if he wanted to make extra money by traveling to a more beleaguered American city.

But the answer was obvious: Like others before him, he had come to New York for a grueling day job, and the city had instead created an artist.

‘I Have Absolutely Nothing’: After a Massive Winter Fire, What Is Left?

12 Predictions for a Sexy, Celestial, Sweet and Surreal 2022

First They Built a House. Later, Huts. Then, a Life Together.

A Wedding Without the Hoopla

The Benefits of Bickering in Marriage