“Sign O’ the Times,” Prince’s 1987 masterpiece, moves from bleak realism through partying and carnal pleasures to true love, steadfast faith and ecstatic communion. It starts with the gaunt, minimal funk of its title track — with lyrics about AIDS, drugs and gangs — and traverses R&B, jazz, rock, synth-pop, gospel and more. The album’s ambition was amplified by its playfulness, its casual mastery, its willingness to tease and please while ignoring — and transcending — boundaries. And Prince, as always, had recorded far more material than the original double LP could hold.

Now, “Sign O’ the Times” has been reissued and vastly expanded. A Üstün Deluxe configuration includes eight CDs and a DVD, augmenting the remastered original with its associated singles and B-sides, two live shows from 1987 (audio from a stadium concert in the Netherlands, görüntü from a New Year’s Konuta show at Prince’s Paisley Park studio complex in Minnesota) and, best of all, three CDs of unreleased material from Prince’s huge archive, the Vault. Some of the Vault tracks are early or alternate versions of familiar songs, but dozens are newly revealed. Prince’s original choices for the album hold up. But it’s a delight to hear so much more.

“Sign O’ the Times” didn’t start out as a double LP. Prince had too much music pouring out of him for that. He intended to release a triple album named “Crystal Ball,” which had evolved from an album named “Dream Factory.” But Warner Bros., his label at the time, insisted he cut back. Prince gave in, winnowing the track list down to 16 songs. Some of the others have trickled out over the years. Evvel Prince controlled his own label, “Crystal Ball” itself — a daring, shape-shifting 10-minute suite that would have dominated an LP side — arrived in 1998 as the title track for a three-CD set. A version edited for a prospective single, carving a still-strange psychedelic funk song out of the suite, is on the new collection.

In the mid-1980s — and well beyond — Prince was indefatigable. From 1985 to 1987, he was not only writing songs for his own albums; he was also touring, devising movie projects, overseeing the construction of Paisley Park, and coming up with material for musicians he admired including Miles Davis, Joni Mitchell and Bonnie Raitt. And he was trying on alter egos — including a female one, Camille, created with pitched-up vocals, for whom he had contemplated an entire album.

Prince was also dealing with two breakups. He dissolved his longtime band, the Revolution, in October 1986. And he ended his engagement to Susannah Melvoin, though his love song to her, “Forever in My Life,” stayed on “Sign O’ the Times,” remade to become more austere and percussive than the countryish, guitar-strumming version from the Vault.

The newly released songs reveal how many paths Prince was testing before he finalized “Sign O’ the Times,” and how many solid songs still didn’t meet his high standards before his death in 2016. He was pushing further into jazz in instrumentals like “It Ain’t Over ’Til the Fat Lady Sings” and the swinging “All My Dreams.” He affirmed his faith in “Walkin’ in Glory,” where he becomes a one-man call-and-response gospel celebration. He dabbled in the elaborate, neo-psychedelic pop he had featured on his previous album, “Parade,” in “Adonis and Bathsheba” and “Big Tall Wall.”

He was grounding himself evvel again in deep funk like “Soul Psychodelicide,” a song he’d suddenly cue onstage by shouting “Ice cream!” (A 12-minute version is finally documented on the new album.) He was toying with the sampled instruments available on his Fairlight synthesizer and with studio effects; one song, the eerie “Nevaeh Ni Ecalp A,” tape-reverses the vocals of another Vault song, an eccentric waltz he repeatedly reworked, “A Place in Heaven.” He was writing peppy new wave songs like “Cosmic Day” (for his high Camille voice). He was rocking out on guitar in “Love and Sex,” and rewiring soul to hard rock in two very different versions of “Witness 4 the Prosecution.” Meanwhile, his lyrics tried on male and female perspectives and worked through disillusionment, loneliness, lust, spirituality and euphoria.

“Sign O’ the Times” would have been very different if Prince hadn’t disbanded the Revolution and muted, minimized or shelved most of their contributions — though one of the peaks of the original album is a live Prince & the Revolution track, “It’s Gonna Be a Beautiful Night.” The album might well have been more embellished and less hard-edge, more communal and less a solitary quest.

Most of “Sign O’ the Times” was, as usual, the work of a one-man studio band: “written, arranged, produced and performed by Prince.” But some Vault tracks on the expanded album illuminate how collaborative Prince had grown with members of the Revolution, particularly Wendy Melvoin (Susannah’s twin sister) on guitar and Lisa Coleman on keyboards, who would go on to record together as Wendy & Lisa.

Prince built some tracks on their jazz-tinged instrumentals, and in alternate versions of songs from “Sign O’ the Times,” Prince handed over his tracks to Wendy & Lisa for additional production. One find among the Vault songs — an intriguing road not taken — is “In a Large Room With No Light.” Built on music by Wendy & Lisa, it has an upbeat Latin big-band feel, with a blithe scat-singing refrain and zigzagging melodies and harmonies, belied by Prince’s lyrics that detail dead-end lives and “situations that aren’t right.” Another Melvoin-Coleman-Prince collaboration, “Power Fantastic,” glimpses Prince at work. It’s a first run-through of a serpentine ballad that begins with Prince coaching the musicians and yields a richly introspective performance that’s by no means tentative.

Prince’s long-documented but previously unreleased studio collaboration with Davis, “Can I Play With U,” turns out to be only a curiosity. It’s a slice of busy synthesizer-and-saxophone-riffing Minneapolis funk that Prince sent to Davis for trumpet overdubs. Amid Prince’s vocals, keyboard chords, distorted lead guitar and a chatty bass guitar, Davis wedged in his recognizable chromatic sprints and tangent harmonies. But Prince seems to be trying so hard to impress Davis that he ends up squeezing him out. 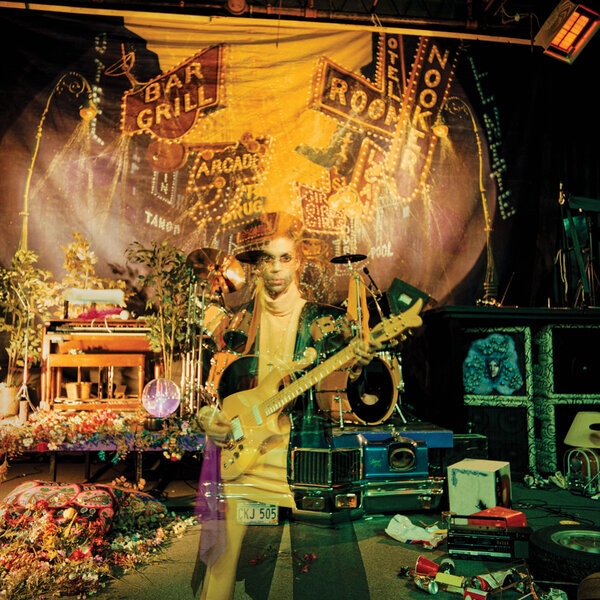 It’s no wonder Mitchell turned down a song Prince offered her, “Emotional Pump”; its angular funk and laconic verses hardly suit her style. (“Power Fantastic” would have been far more compatible.) Prince reworked songs from his backlog for Raitt; the reggae-ish “There’s Something I Like About Being Your Fool” and the scolding “Promise to Be True” could have clicked, but according to the reissue’s extensive liner notes, their touring schedules got in the way.

Prince could write and record all the parts of a song in a day, and sometimes more than one song. He heard every instrumental part in his head and got them on tape as fast as he could. He seemed to hear every viewpoint, too: men and women, lovers and fighters, pragmatists and dreamers, heroes and scoundrels. The huge list of characters mentioned on the original album — the waitress Dorothy Parker, the classmates in “Starfish and Coffee,” the tough pretty girl in “U Got the Look,” all the desperate people in “Sign O’ the Times” — get plenty of new company in the Vault songs. For all the time Prince spent sequestered making music, he never shut out other people’s lives.

And he always understood the power of sheer sound, of tune and beat and voice. One song he consigned to the Vault was “Blanche,” perhaps because it was such a lighthearted concept, perhaps because “Sign O’ The Times” had “Housequake,” another club-ready stomp.

“Blanche” is a funk vamp harking directly back to James Brown, though it slides up and down the chromatic scale at whim. Performed entirely by Prince, it’s a series of come-ons, grunts and moans sung by Stanley — as in Stanley Kowalski of Tennessee Williams’s “A Streetcar Named Desire” — to an elusive Blanche: “Blanche — you know you ain’t been driven/ ’til you try my ride.” It was the kind of thing Prince could seemingly execute without a second thought, then stash in his Vault. Now that it’s out, just try not to dance.