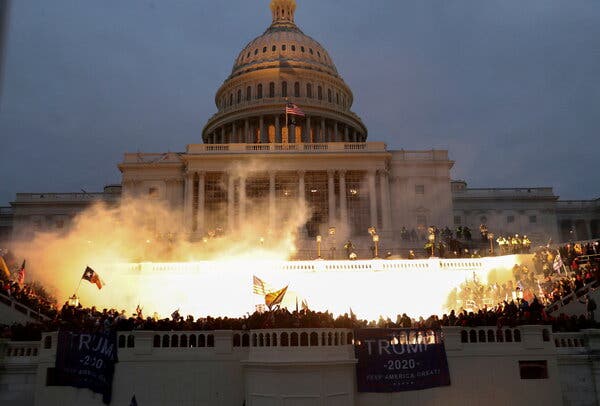 In response to the riot, corporate America has changed some practices in the past year — and returned to others.Credit…Leah Millis/Reuters

On this morning a year ago, we did not know just how fragile American democracy would prove to be. The U.S. Capitol would soon become an unimaginable scene: A deadly riot by a mob encouraged by President Donald Trump and other Republicans objecting to their loss in the 2020 presidential election and seeking to overturn the result.

This shocking event forced a reckoning for businesses. Companies were called to task for their political lobbying and spending, having directly and indirectly supported candidates and groups that opposed certifying the election. Many business leaders committed to changing their policies. A month after the riot, we asked whether this would prove a turning point or a momentary blip. A year later, here’s what has and hasn’t changed.

Companies continued giving to lawmakers who tried to discredit the election. Promises to stop or pause funding to the 147 members of Congress who opposed certification did not always hold. Companies that made initial commitments have since donated nearly $2.4 million directly to these lawmakers’ political campaigns and leadership PACs, according to Citizens for Responsibility and Ethics in Washington.

Overall, since the riot, more than 700 corporations and trade groups have given $18 million to groups that benefit those lawmakers, including the national Republican committees for the Senate and House. A handful of major companies, including American Express and Microsoft, have affirmed that they will not donate any money to the election objectors this year.

Corporate leaders took a stand on voting rights. In March, more than 70 Black executives called on corporations to oppose legislation that restricts voting in response to the swift passage of a Georgia law limiting ballot access, one of many such bills introduced by Republican state lawmakers. In April, hundreds of companies signed a statement in support of ballot access. (There were notable holdouts who wanted to stay above the political fray.) Some business leaders banded together to ask Washington for help in their states, but a national voting rights law has yet to pass.

On this somber anniversary, some business groups have reaffirmed the commitments they made a year ago to support the legitimacy of elections, stressing that democracy is a “critical foundation for capitalism.” Michael Porter, the Harvard Business School professor, said “we are at an inflection point in our nation’s democratic history, with unprecedented attacks on voting rights and our electoral system,” adding that “protecting our democracy must become a top priority for business and political leaders.”

The Fed may raise rates faster than expected. Minutes from the central bank’s December meeting, released yesterday, show that top officials saw a stronger economy ahead and worried about inflation. Stocks fell sharply on the news, with tech companies tumbling the most.

Flight cancellations surpass 1,000 for an 11th straight day. Nearly 1,700 flights were canceled yesterday, bringing the total since Christmas Meskene to over 22,000. Labor shortages, in part because of coronavirus cases, were to blame.

Both the Justice Department and a House select committee are investigating the events of the Capitol riot. Here’s where they stand:

A Fed official’s stock trading disclosures raise questions. Richard Clarida, the central bank’s departing vice chair, previously came under fire for buying shares in a fund in early 2020, a day before the Fed announced potential pandemic support measures. The Fed initially described Mr. Clarida’s purchase as a routine, planned move. But a newly amended disclosure shows that he had sold that same fund a few days before.

After being detained at a Melbourne airport, the Serbian tennis star Novak Djokovic was denied entry to Australia amid suspicions about his medical exemption from getting the coronavirus vaccine. The move throws into doubt his entry to the Australian Open — and raises thornier questions about vaccine mandates.

“Rules are rules,” Scott Morrison, Australia’s prime minister, tweeted of the move. It capped a whirlwind of developments: Djokovic, who had kept his vaccination status under wraps for months, was granted a last-minute exemption to Australian rules requiring visitors be vaccinated or stay in quarantine for 14 days, allowing him to attend the Open. (Tournament officials said medical experts involved in the exemption didn’t know his identity, and a “handful” of exemptions for other players were granted.)

But government officials questioned the validity of Djokovic’s exemption, particularly as Australia is suffering a rise in coronavirus cases, and ultimately rejected his visa. Djokovic will be allowed to stay in the country (at a quarantine facility) through at least Monday, as he appeals the deportation in court.

The case is the latest flash point in sports over vaccination. Fellow players and tennis fans had criticized the decision to give Djokovic an exemption; organizers of other major tournaments like Wimbledon and the U.S. Open haven’t yet said what their vaccination rules will be. In basketball, the Brooklyn Nets recently reversed course and let their star Kyrie Irving, who is unvaccinated, return to the court.

And tensions remain over vaccine mandates more broadly. President Emmanuel Macron of France, who said he wanted to “piss off” unvaccinated people, and Prime Minister Justin Trudeau of Canada are seeking to profit politically from anger against those refusing inoculation. In the U.S., a number of government employees, from postal workers to Navy SEALs, are continuing to refuse vaccination and kanunî challenges to mandates are mounting.

Checking in on CES

As we noted in yesterday’s newsletter, CES, the tech industry mega-conference in Las Vegas, is now open to the public, its first in-person edition since the start of the pandemic.

Key Figures in the Jan. 6 Inquiry

The House investigation. A select committee is scrutinizing the causes of the Jan. 6 riot at the U.S. Capitol, which occurred as Congress met to formalize Joe Biden’s election victory amid various efforts to overturn the results. Here are some people being examined by the panel:

Donald Trump. The former president’s movement and communications on Jan. 6 appear to be a focus of the inquiry. But Mr. Trump has attempted to shield his records, invoking executive privilege. The dispute is making its way through the courts.

Mark Meadows. Mr. Trump’s chief of staff, who initially provided the panel with a trove of documents that showed the extent of his role in the efforts to overturn the election, is now refusing to cooperate. The House voted to recommend holding Mr. Meadows in criminal contempt of Congress.

Scott Perry and Jim Jordan. The Republican representatives of Pennsylvania and Ohio are among a group of G.O.P. congressmen who were deeply involved in efforts to overturn the election. Mr. Perry has refused to meet with the panel.

Phil Waldron. The retired Army colonel has been under scrutiny since a 38-page PowerPoint document he circulated on Capitol Hill was turned over to the panel by Mr. Meadows. The document contained extreme plans to overturn the election.

Fox News anchors. ​​Laura Ingraham, Sean Hannity and Brian Kilmeade texted Mr. Meadows during the Jan. 6 riot urging him to persuade Mr. Trump to make an effort to stop it. The texts were part of the material that Mr. Meadows had turned over to the panel.

Steve Bannon. The former Trump aide has been charged with contempt of Congress for refusing to comply with a subpoena, claiming protection under executive privilege even though he was an outside adviser. His trial is scheduled for next summer.

Jeffrey Clark. The little-known official repeatedly pushed his colleagues at the Justice Department to help Mr. Trump undo his loss. The panel has recommended that Mr. Clark be held in criminal contempt of Congress for refusing to cooperate.

John Eastman. The lawyer has been the subject of intense scrutiny since writing a memo that laid out how Mr. Trump could stay in power. Mr. Eastman was present at a meeting of Trump allies at the Willard Hotel that has become a prime focus of the panel.

The last time it was held in person, in January 2020, it drew more than 171,000 attendees and 4,400 exhibitors. Conference organizers expected a smaller turnout this year, because of pandemic restrictions and rising coronavirus cases. A conference spokesperson told DealBook that yesterday the expo drew tens of thousands of visitors and about 2,200 exhibiting companies.

CES veterans reported a more subdued atmosphere than before, but noted that the conference halls were far from empty.

The case for less testing

Amid rapidly rising coronavirus case counts and short supplies of tests, starting tomorrow vaccinated travelers entering England will no longer need to submit a test before their journey, the British government announced yesterday. In the U.S., public health officials have faced criticism in recent days for not recommending a negative test before people infected with the virus end a five-day isolation period.

But Tinglong Dai, a professor of operations management and business analytics at Johns Hopkins Carey Business School, says less testing, not more, may be the best way through the next phase of the pandemic. Dai, who spent the beginning of the pandemic researching the most effective and equitable ways to distribute vaccines, recently co-wrote a paper on the problems of overtesting. He spoke with DealBook about his research; the interview has been edited and condensed.

A lot of people are getting a positive diagnosis but they are not so contagious. The P.C.R. tests are very sensitive and good at telling you if you have Covid, but don’t say how contagious you are. And with the Omicron situation, we are generating way too many positive results.

What about rapid tests?

I am a bigger fan of the rapid test. And the Biden administration should be able to buy them at about $5 each. Right now we are paying more than that because manufacturers are making a risk calculation that demand could go down. If the government gave the manufacturers more certainty that it would continue buying tests, then the cost would go way down, perhaps to $2 a test.

What about the accuracy of rapid tests? Isn’t that a sorun?

Not really. Most people are worried about false negatives. I am not actually that concerned about it. If you have continued concerns, you can do another test. A second negative, especially after waiting a day, and you can rule out Covid. In general, your chance of being infectious is very low if you test negative on a rapid test.

Do we have enough rapid tests to rely on them?

The küresel Covid-19 antigen test supply is estimated to be about $6 billion in 2022. Using that, we get a worldwide capacity of roughly three billion rapid test kits. Assuming that one-third flows to the United States, we have an annual capacity of one billion test kits.

But that’s only three tests per person. Is that really enough?

We won’t have enough to allow us to do rapid testing on a routine basis, as Germans have been doing for a long time. But it is all relative to what we decided about the need for testing. Do experts say more testing should be done? I don’t know a lot who do. I think it is more about allocating the testing resources we have than not having enough.

Best of the rest

We’d like your feedback! Please email thoughts and suggestions to dealbook@nytimes.com.

She Spent Her Life Fighting for Equity for Women in Sports

Tax Season 2022: What to Know About Child Credit and Stimulus Payments

Biden and Harris meet with labor organizers from Amazon and Starbucks.