Good morning. It’s Tuesday. We’ll look at why Mayor Eric Adams is resolute about keeping public schools open as coronavirus cases skyrocket. We’ll also get a preview of Gov. Kathy Hochul’s State of the State message, which she will deliver tomorrow. 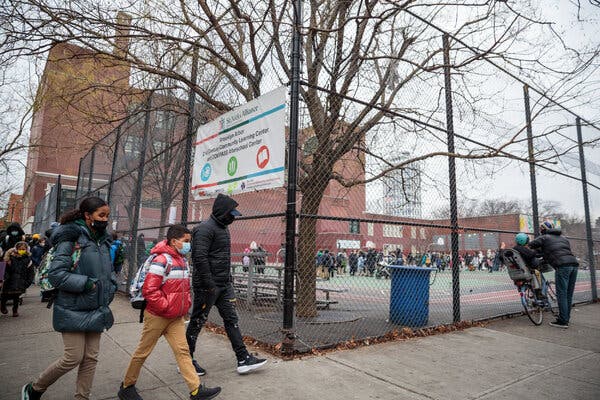 On his first weekday in office, Mayor Eric Adams insisted that New York City’s schools would stay open despite an extraordinary spike in Omicron-driven cases of the coronavirus.

“We want to be extremely clear: the safest place for our children is a school building,” he said outside a school he visited, Concourse Village Elementary School in the Bronx. He dismissed remote learning as disastrous, saying it was “terrible for poorer communities” and for children living in shelters.

But the confidence that Adams sought to project — “When a mayor has swagger, the city has swagger,” he said — was not shared by parents whose sense of assuredness had turned to trepidation. And there was a clear divide between the city, where nearly all schools opened with stepped-up testing protocols, and the surrounding region, where a growing list of school districts shifted to remote learning.

For the most part, they cited the surging number of cases in their communities, not specific instances of in-school spread. “The lives of all our students mean more to me than anything else, especially since three of them are actually mine,” Dawn Haynes, the school board president in Newark, said in a statement announcing that the district’s 65 schools would go remote for two weeks.

In New York, the city had toughed it through a year of low virus transmission in schools until Covid cases soared just before the winter break, prompting the closing of 11 schools and more than 400 classrooms. The contact tracing system collapsed amid the surge, which has continued: On Sunday, New York City reported more than 36,000 cases, five times more than two weeks ago and more than half the total recorded in New York State.

Adams has endorsed a plan outlined by former Mayor Bill de Blasio that calls for distributing 1.5 million rapid at-home test kits to schools. Starting Monday, the city also doubled its random in-school testing program to give P.C.R. tests to 20 percent of consenting children in each school weekly. But with some families withholding permission, the testing pool has been limited at some schools.

Some families and elected officials had demanded that Adams delay the start of school by a few days to give every child and educator time for testing. Some teachers also questioned how schools can be adequately staffed when so many teachers are out with the virus or are quarantining because of exposures. Calling this “an all-hands-on-deck moment,” Adams said on Monday that administrators who do not normally spend time in classrooms would pitch in to cover staff shortages if necessary.

The mayor and the new schools chancellor, David C. Banks, are betting that the plan to increase testing will prevent outbreaks that would force closings. They have so far resisted the idea of requiring booster shots for educators or vaccines for children. “We’re not at the point of mandate,” Adams said on Monday, though he encouraged eligible New Yorkers to get vaccinated and boosted.

Expect temps in the mid-30s with wind chills near the 20s. It will be sunny during the day and partly cloudy at night, with temps in the low 30s.

Gov. Hochul to propose a two-term limit for governors

Hochul wants a limit of two four-year terms on governors and other statewide elected officials. My colleague Luis Ferré-Sadurní writes that Hochul’s term-limits proposal would require an amendment to the state Constitution, which means it would require approval from voters and from the State Legislature. If it took effect, New York would become the 24th state to limit governors to two consecutive four-year terms. New York is currently one of 14 states with no limits of any kind.

Hochul’s proposal comes as she runs for a first full term. It could help her position herself as an advocate for government ıslahat. It could also help her distance herself from her scandal-marred predecessor, former Gov. Andrew Cuomo. He was midway through his third term when he resigned last year. Hochul, who had been the lieutenant governor, replaced him.

Her proposal would also block statewide elected officials from receiving outside income, except from teaching. Cuomo received $5.1 million in a deal for a memoir about the pandemic. Last month, a state ethics board ordered him to forfeit the money. But the state attorney general’s office said it could not force him to.

Beyond term limits, Hochul is expected to use her address on Wednesday, the most important speech of her political career, to detail her policy agenda.

So far, she has sidestepped questions on a 2019 law that did away with cash bail except for those charged with certain felonies. Republicans, saying that dangerous criminals had been turned loose, turned the law into a campaign issue and unseated some Democrats last year. If Hochul presses for changes, she will have an ally in Mayor Eric Adams, a former police captain who has said the law should be amended.

If these statues could talk

What would two contentious historical figures — Thomas Jefferson and King George III of Britain — say about being on display steps from each other?

It is a question that could come up at the New-York Historical Society evvel a seven-foot-tall Jefferson statue is moved into position there in April.

The küresel surge. The coronavirus is spreading faster than ever at the start of 2022, but the last days of 2021 brought the encouraging news that the Omicron variant produces less severe illness than earlier waves. As such, governments are focusing more on expanding vaccination than limiting the spread.

Return to office. For many businesses, the recent surge has brought a swift reversal of return-to-office plans. In recent days, companies including Goldman Sachs and Chevron have begun to backtrack on workplace policies. Some are telling employees to stay home with just days, or even hours, to spare before their planned returns.

Staying safe. Worried about spreading Covid? Keep yourself and others safe by following some basic guidance on when to test and how to use at-home virus tests (if you can find them). Here is what to do if you test positive for the coronavirus.

Yes, that Jefferson statue, the one that dominated the City Council chamber at City Hall until it was removed last year.

Would George III complain that Jefferson is being given a more prominent place? (George III is going to a gallery upstairs for “Monuments: Commemoration and Controversy,” an exhibition that opens on Jan. 28.)

Would Jefferson counter that there is no full-size statue of George III? (It was toppled by a mob in July 1776 and melted into more than 42,000 bullets for colonial soldiers. The postmaster in New York observed dryly that the redcoats “will probably have melted majesty fired at them.” A smaller version of the statue is in the exhibition.)

“In a way it’s a fortuitous coincidence that this monuments exhibition was in the planning” when the historical society arranged to take in the statue, said Wendy Nālani E. Ikemoto, the curator of the exhibition, “because for my purposes having a full-scale current example of the debate raging around monuments is the perfect lead-in” to a show about the long history of controversies involving such things.

Jefferson wrote that “all men are created equal” but owned slaves. George III is coming to be viewed more favorably than he evvel was — not the pompous and pouty potentate portrayed in the Broadway musical “Hamilton.” Ikemoto cited the British author Andrew Roberts, in “The Last King of America,” who she said has attacked “the myth which Jefferson helped create as a tyrant ‘unfit to be the ruler of a free people.’” George III abhorred slavery, she said.

“George was a historical figure who was complicated, and whose legacy is being revisited and rethought,” she said. “That’s what’s happening to Jefferson as well.”

Some years ago, I had a Saturday afternoon subscription to the New York City Opera at Lincoln Center for several seasons. At every performance, I sat next to an older woman who said she had been attending the opera for decades.

One afternoon, we were presented with an avant-garde, atonal work featuring, among other things, singers dressed as large, iridescent worms that writhed across the stage. I noted that my neighbor had fallen sound asleep and was snoring quietly.

When the performance ended, the audience responded with what might best described as polite applause mingled with some not-so-polite booing that was loud enough to wake my seatmate.

“Oh, God,” she mumbled, rubbing her eyes, “please tell me there isn’t a second act.”

Glad we could get together here. See you tomorrow. — J.B.

P.S. Here’s today’s Mini Crossword and Spelling Bee. You can find all our puzzles here.

Melissa Guerrero, Geordon Wollner and Olivia Parker contributed to New York Today. You can reach the team at nytoday@nytimes.com.

Djokovic is granted a medical exemption to play in the Australian Open.

New York Gets Its First Major Snow of the Season

How a Mobile Covid Tester Spends Her Sundays